I've decided to join the Barren Librarian in her That's Me Thursday posts. I feel like I've been spotty with my posting and I missed you so here I am with three things about me that have nothing to do with IF. :)

1. I went to college in Boston and absolutely loved it. I went to a small school and it was just right for me. Made some great friends there, just wish we did a better job staying in touch. A friend and I headed out to Cleveland Circle one day and when it was time to head back towards school we saw that the T coming and I decided to run to catch it because I didn't want to miss it. Well, when I did that I managed to run in front of another train. My friend said my life flashed in front of her eyes when I ran in front of the train. Apparently, the T driver looked at her like "What the hell did she just do??" Thankfully I am here to tell the story! 20+ years later we still talk about that day. :)

Here's a picture for you...I am pretty surprised I found one that looks so similar to what the trains were like that day. 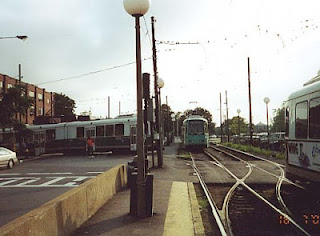 2. Growing up with two brothers I started to enjoy sports at a fairly early age. I had a crush on a boy when I was in the 9th grade who was on the basketball team and I decided that it would be good if I started to follow the Cetlics. So one night I watched a game with my brothers and had them teach me all of the players on the team. I memorized them according to their number. The more games I watched the more I liked it and actually started liking the games for myself and not just to impress a boy. Well, over time I became obsessed with Danny Ainge. My bedroom was plastered the pictures of him cut out from the newspaper and the magazine Celtics Pride. In one of the issues the cover story was about Danny Ainge and his family...you know that went right up on the wall after I was done reading it. Only thing is, once it was on the wall I placed a piece of paper over the picture of Danny's wife's face!

3. I once donated to the Sierra Club due to PMS. I was home alone one night watching the Jimmy Fund Telethon and became super emotional during a Q&A session they were airing. People had donated money in order to get to participate in the session with some of the Red Sox players. Well, one of the questions was asked by a little kid and he asked one of the pitchers what it felt like when he gave up a home run. The way he answered the question and spoke directly to the boy who asked it had me blubbering. I was so tempted to pick up the phone to donate right then and then but there was a knock on the door. It was someone asking for donations for the Sierra Club...within a few minutes of the explanation of the club and what the money would do they were walking away with a check from me!
Posted by KelBel at 12:14 PM