M loves, loves, loves owls so for Halloween this year he was an owl. :) Because I made the costume I decided to try to make him look like Hedwig. :) I love the way the costume came out...only downfall was that his wings were fairly heavy and kept pulling the neck of his shirt. We finally realized that if we pinned the wings on differently it worked better!!

We didn't actually trick or treat with M because of his allergies. Thankfully he had no clue that he was missing out on something. We had a neighborhood party in our cul-de-sac and M helped pass out the treats to the kids (non-food treats...we participated in the teal pumpkin project again this year!). Until the rain started it was a great night! The rain only dampened the night momentarily...a fun time was had by all! 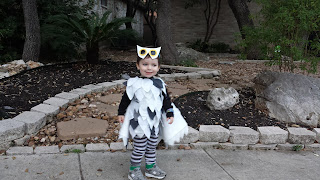 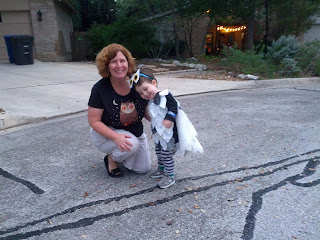 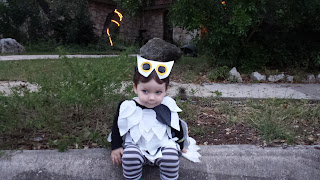