I keep promising to update more often and then I don't...so no promises this time, just an update. :)

For the past month or so we have been dealing with almost daily thunderstorms. It has not been fun...some of the storms have been severe and we dealt with some crazy hail in April. BUT the silver lining of the storms is that we bought a new truck at a hail sale. It's a 2012 Pathfinder so an upgrade from my 2004 Pathfinder. :) M loves the windows in the back because they go all the way up and all the way down. 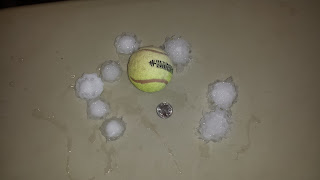 M is currently obsessed with construction vehicles...especially diggers and rollers. A lot of times before bed instead of singing our songs we have to talk about diggers. One night during one of the storms we sat and chatted while we waited for the thunder to stop, so for a few nights after that there was no singing, just chit chat. :) More than once M has found his way into our bed due to the thunder...I can't say that I blame him. It's so loud! It's made me jump more than once.

﻿﻿﻿ Grammie came to visit us two weeks ago...M loved having her with us. We picked her up in Houston as we were headed that way for the weekend to see J's boss compete in the Ironman. Only problem was I did not confirm which airport she was flying into...so we ended up at the international one while she was waiting at Hobby. I am so lucky that my mom is such a good sport because she just kept telling me not to worry about it that she was enjoying her book and people watching.
﻿﻿ We got to visit Galveston for the first time that weekend as well...we stayed at the Hotel Galvez, which was a big treat! We got a great deal online because it was during the week and not quite in season yet. We picked the hotel because it's where Bill and Jen from the Little Couple stayed. More than once we've found something good in Houston area because of my watching (obsession) with their show.

We were lucky enough to have a date night while my Mom was with us...really I was the lucky one, because we got to go see Dave Matthews perform at the Woodlands. SO MUCH FUN :) M was so funny the next morning when I gave him his shirt from the concert and told him about seeing Dave sing. He blushed and got super excited. I am brainwashing him with Dave when we are not listening to Sesame Street.

When we got back from Houston the $hit hit the fan at work for J...on Monday his boss was fired. The changes to the company happened fast...the entire culture of the company changed in five minutes. On Wednesday J met with the new President/CEO to let him know he was on board with the new leadership. After that meeting J met us for breakfast before we took my Mom to the airport. J went back to work and we headed to the airport, he didn't even make it to his office before he was let go. So now M has had stay at home parents for the last two weeks. For the most part it's gone really well...the only bickering that happened was while I had PMS. J is actively looking and hopefully will find something soon!


I'll leave you with before and after pictures of M's haircut...if he didn't hate haircuts so much it would happen on a more regular basis. :)

Well, we did it...no more binky! I looked at M's binkies last week and one was in really rough shape so that gone thrown away without any discussions. Then over the weekend I noticed that the other one had a tear in it. So it was time for binky to go on the shelf. I showed it to M and explained that it was not safe for him. He seemed to understand...with his food allergies we talk about things being safe or not safe quite often. It went on his bookshelf with his "special lights". (We have some small lights from Target on his shelf that we bought at Christmas time and use as a nightlight...he calls them his special lights.)

So far it's gone okay...no real tears at bedtime/naptime because binky is no longer there. We had started talking about it before the day arrived and watched an Elmo video - Bye Bye Binky. Going to sleep definitely takes longer and some nights we have to help more than others, but overall, it's going well!

I can't believe how randomly I post now. I do read your blogs and try to comment but life at home is crazy with a toddler! M is a funny little boy and keeps us (and the dogs!) on our toes. I thought I'd give you some random updates and some pictures.

* We had a great holiday season...my Mom came down to visit and M loved having Grammie here to visit. They were "back seat buddies" in our Pathfinder. :)

* We are still taking swim lessons and M is getting more comfortable with going under the water. I don't ever force him and if he doesn't want to go under he doesn't do it.

* Like most toddlers he's a bit obsessed with his nose...the other day he said to me "Booger, Mommy-o, booger." He also tried putting his drum stick up his nose...I laughed at myself when I said only fingers in your nose.

*M has discovered Sesame Street...it happened while J was in Vegas for work in December and we were home alone. One morning I decided to give it a try and Elmo was playing basketball. M loves basketball and that is what got him hooked on Sesame Street. He also loves Abby. :) He doesn't really enjoy sitting for an episode so we watch videos. His FAVORITE song is Sing. Oh my gosh, listening to him sing the song makes my heart melt every time. It's so funny to watch the video because it's from when I was a kid. It cracks me up to watch  Luis jam while playing the guitar.

*We have given up on the sleep sacks at M's request...so far so good (fingers crossed!). He has not yet tried to climb out of the crib! Next is trying to give up the binky. It's only used at nap and bed time. We are down to one binky and when that is broken or lost, we are done. I am trying to talk M about it and get him thinking about no more binky.

*We had more allergy testing done last month. We have added peanuts to the list. :( The numbers were low, but the doctor said to avoid it for now. It makes me a bit anxious but not much more than the others. M is starting to develop an understanding of his allergies. We bought him a book about it and it quickly became on of his favorites!

*We have been working a lot with M and using his kind words and his manners. But wow did I feel like a jerk when he got the sticker after his blood test for the allergy testing and I had him say thank you to the nurse! Through his tears he managed a very sad thank you. Oh well, I guess manners don't take a break!

* I am still loving being at home but I know that at some point M will need to go to preschool. I figure it's time for me to start researching schools in the area and finding out their food allergy policies. That is definitely one of my biggest fears.

Now for some pictures. :)