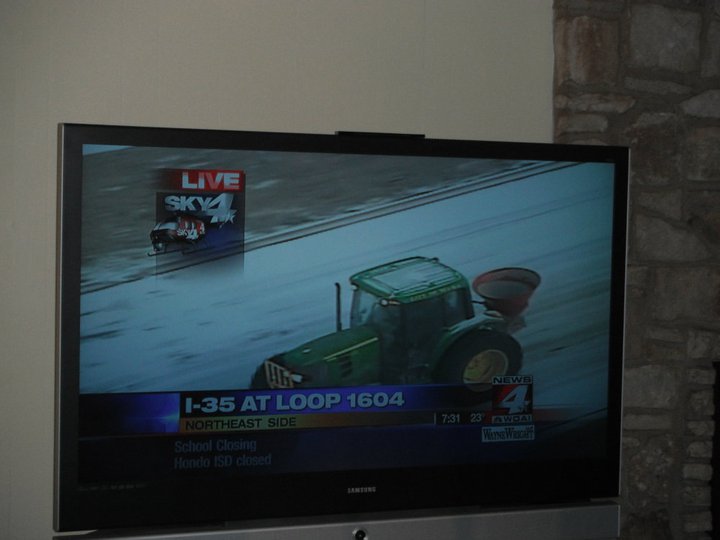 Thought I would give y'all a picture to giggle at this morning. This was taken in Feb 2011 when we had "snow" here in San Antonio. I think we got an inch at the very most but it shut the entire city down. This picture cracked J and I up...it was a tractor using the seeding contraption to sand the highway! Hoping we get to see some real snow when we are up north for Christmas!
Posted by KelBel at 7:04 AM 4 comments:

I found a quote today that I fell in love with as soon as I read it. I've never liked the phrase "moving on" after tragedy.  We don't move on.  We move forward, taking memories, precious faces and stories, and the things we're learning with us. It resonated with me on so many levels.

I don't have all of the words or the ability to properly express my sadness regarding the events last Friday in Sandy Hook. The pain I felt was more intense than I expected. I want to find a way to remember the innocent victims. This post really made me think: http://dykeintheheartoftexas.com/2012/12/16/his-name-is-noah-pozner/. I am choosing to remember Dylan Hockley and Anne Marie Murphy.

We had the follow-up appointment with Dr. A today regarding my surgery. It turns out that the laproscopy was definitely beneficial. He found Stage 1 endometriosis. He was not overly concerned about it...the big surprise was the fibroids he found when he was in there. He showed us pictures of them this morning. Um, wow. So glad we decided to move forward with the surgery. It sounded like surgery would have happened once the fibroids had died on their own. Dr. A said eventually they would have caused me a great deal of pain.

We also talked about the future and what options are out there for us. We talked a lot about the possibility of using frozen donor eggs. There is an "Assured" plan that would reimburse us 100% if we went through the program and were not successful. If you opt out on your own you are reimbursed up to 80%. Should you be successful in round 1 or 2, well, you paid a little extra.

We are also going to get a price from Dr. A's office for a fresh donor cycle. He said that he would offer us a "frequent flyer" price.

I don't think we'll be making any decisions soon, so we might consider a medicated IUI in January. There is still a lot of talking to do before making that decision. We both know our chances of success are not great but the fear of it being successful and resulting in another loss is very real.

We also had to change Garnett's medicine again...we'll be upping the dose of one of his meds as he had another seizure Saturday night. I am really hoping that he is safe and stays seizure free next week while we are away for the holidays. I hate to think about something happening while we are so far away.

Of my thyroid :) and I was told by the endocrinologist that it looked like a perfect little thyroid. It's a bit on the smaller side, but she wasn't overly concerned about it. It's most likely due to the dosage of Syn.throid I've been on...which she's taking me off - gradually. When she looked at my hands she commented on them being red and said I was on too much medicine. I go in for blood work in 5.5 weeks and then back to Dr. H in 6 weeks.

It was a really interesting (and last minute!) appointment. I filled out the new patient info online yesterday afternoon and received an email at 7:20 last night that there was an opening at 11am today...I grabbed it! So glad I did...it helped me feel like I am being more proactive with my health. Next on my agenda is finally finding a PCP down here. I really haven't had a PCP in years, so it's time to get back on track.

This doctor does not accept health insurance, so she can spend more time with each patient. My appointment lasted just about an hour and she went over everything in detail with me and asked me quite a few questions. She was shocked to hear about the pregnancy last summer when I had my progesterone level tested and it came back low a week before I received the positive pregnancy test. She couldn't figure out why I wasn't put on a supplement once the doctor knew I was pregnant. I wish I had an answer. There were a couple of times when we were talking I wondered "what if" thinking about the losses, but I tried hard to not do that too much. 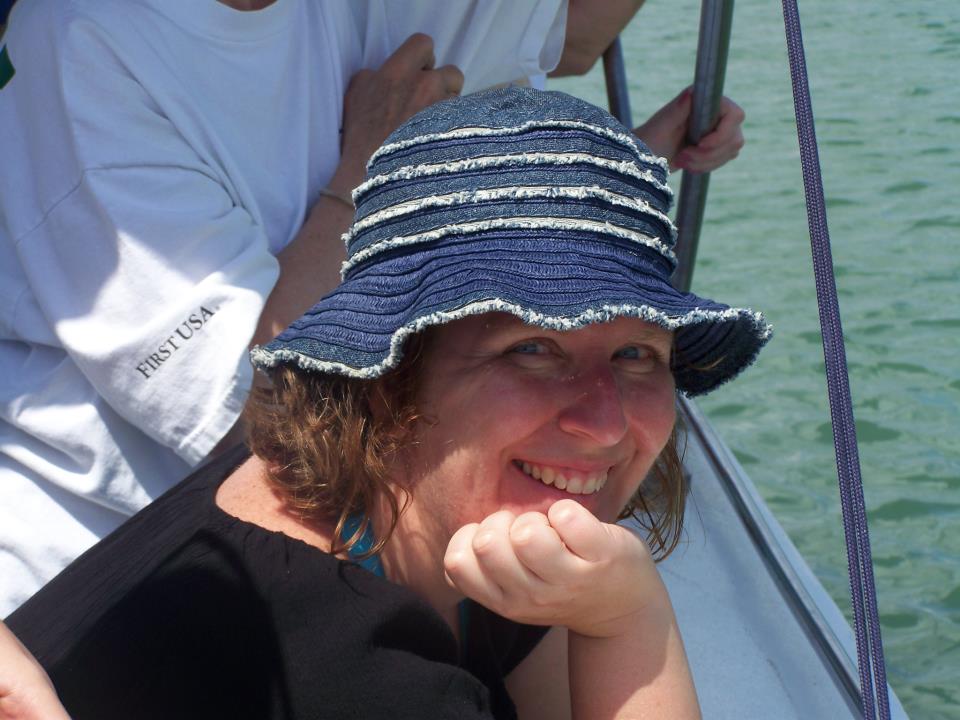 I have been so moody since the surgery last week...I really didn't expect that part of the procedure at all. I did my best to prepare myself for the physical side of it but completely spaced on the emotional side. J and I have snapped at each other more in the past week than we have in a long time. He commented on it the other night and said we really need to work harder at not butting heads so often. I completely agree! I hate it. I really want us to figure out how to get it to stop before going home to MA for the holidays. I can't imagine what would happen if I snapped at him in front of his mom...ugh. We snapped in front of my Mom, but she "got it"...she understood we were both under stress; especially J, because it happened as he was going back to work.

I have an appointment on Monday with Dr. S, my therapist, and J is going with me. I think it will be really good for both of us. My last appointment with her went well, but went in a direction that I did not see coming. When I left I wondered how we spent my whole appointment talking about alternative ways for J and I to become parents when I am still reeling from the last loss. I have had such a tough time recovering emotionally from this one...I find myself thinking "Why me?" a lot and I don't like how that feels. I had a meltdown over the weekend because I am tired of feeling so broken. I want to feel positive about what's next...problem is, I don't know what's next.

Tuesday is the follow-up appointment with Dr. A ...hoping that helps us start a conversation about what's next for us.

Next time I promise to bring some cheese to go with my whine!
Posted by KelBel at 1:05 PM 21 comments:

Back to the real world

Thank you for all your well wishes and thoughts after my surgery. I have to admit I was a bit surprised when I was filling out the paperwork to find out that I was having both the lap and the hysteroscopy, but in the long run it was beneficial, so that was the important part.

It was so good to have my Mom here last week. I did not realize what a busy week at work it was going to be for J, so it was a huge help for all of us to have Mom here! The puppies loved having their Grammie visit. :)

I am happy to say that I am feeling well...really glad I had so much time off from work. I feel like a complete idiot though that it took me more than one day to find all of my incisions.

I am also happy to say that Garnett is doing well with his new drug regimen...we are a full week without any seizures. He gave us a few false alarms this weekend, but no actual episodes. It's crazy to see how Sadie jumps now during a false alarm. I just really hope we can go more than a week or two without a seizure.

Time for me to get back to work...I still have my to-do list to tackle.

Hope y'all have a Marvelous Monday!
Posted by KelBel at 9:11 AM 10 comments:

All went very well yesterday...Dr. A said I did great during the surgery...I got the two for one deal. I ended up having the lap and a hysteroscopy, which ended up being beneficial. Dr. A removed some fibroids...he saved them to show my Mom and J. Glad I didn't have to see them. He also said I had "some" endometriosis...J said he didn't give it a Stage number.  I'll have to ask about that during my follow-up.

It took me a little longer this time around to come out of the anesthesia, but thankfully, I did it without any nausea. I am a bit sore today, but staying on top of my meds. Going to enjoy a day on the couch with the remote. :)

Quick update on Garnett too...we spent almost 90 minutes at the vet's yesterday. We are adding a new drug to his regimen...Dr. Z is hoping that this will help with the cluster seizures. We are really hoping it  will help. He started on it last night, so fingers crossed, we don't have another seizure for a couple of weeks.
Posted by KelBel at 6:31 AM 9 comments:

A Glimpse of Our Weekend

The weekend was a lot of fun, but I cannot tell a lie...I had my moments where I was moody...blame the pill and blame the anxiety of the upcoming lap.

Friday night we went out to our favorite watering hole to celebrate my day...even the puppies were able to join us! It was great fun! My Mom was quite a trooper...by the time we got back to the house she had been up for about 22 hours straight.

Saturday we went to a high school football playoff game...it was great fun! The son of the HR director at J's work was playing. I think we are planning on going to his next game on Saturday - it will be played at the Alamodome.

Sunday was super relaxing...it was full of NFL football and resting. Mom and I threw some clothes shopping in there too! I was able to thoroughly enjoy one of my birthday gifts on Sunday...my youngest brother and his family sent me a package from Legal Sea Foods...we enjoyed clam chowder while watching the Patriots. It was perfect. :)

We had a few downfalls too - outside of my moods - poor Garnett had two seizures. Both happened while he was in his crate, so on a positive note, everyone was safe. It was so strange...he had one Friday night about 10 - 15 minutes after going to bed. We blamed it on being out late at the bar. ;)
Then he had another one at about 3:00am this morning...I can't come up with anything as to why that one occurred. We are off to the vet's tomorrow at 8:00am to get him checked out and to see if there is something we can do to help. We also need to talk about what we should do for boarding while we are away for the holidays. I hate the thought of him having an episode while we are not there.

I leave you with a few pictures. :) 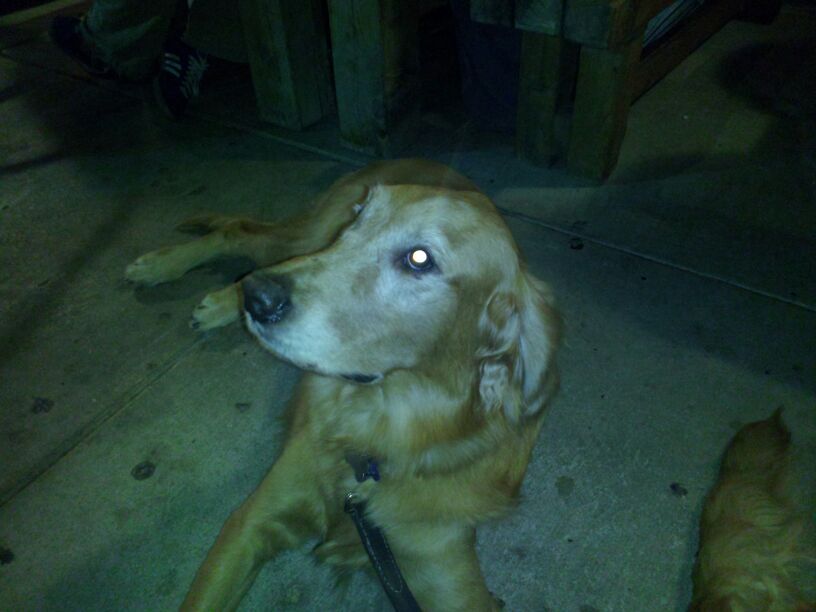 Garnett at the Flying Saucer...he's a perfect "wing man"! 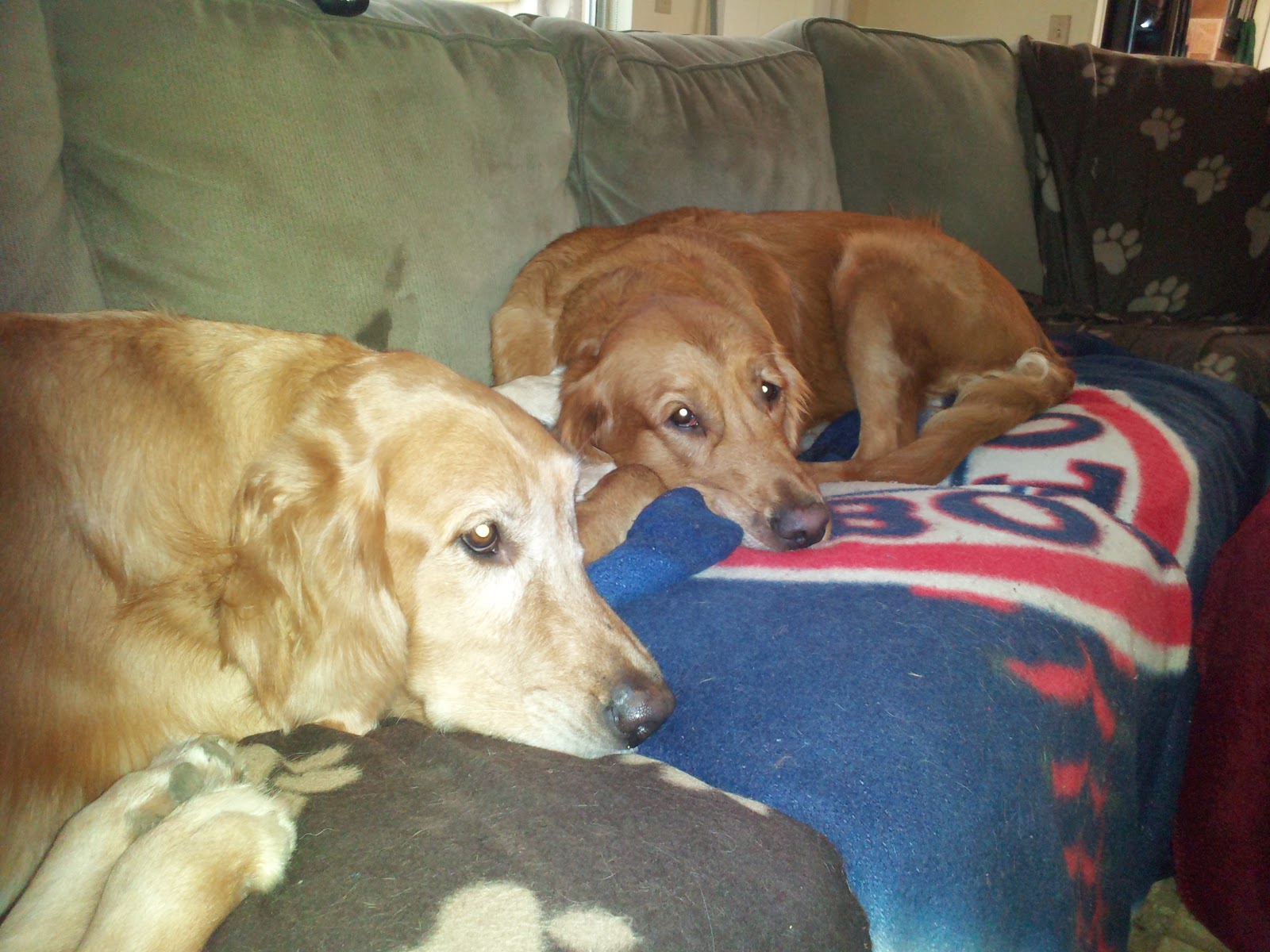 Relaxing on the couch after a late Friday night. 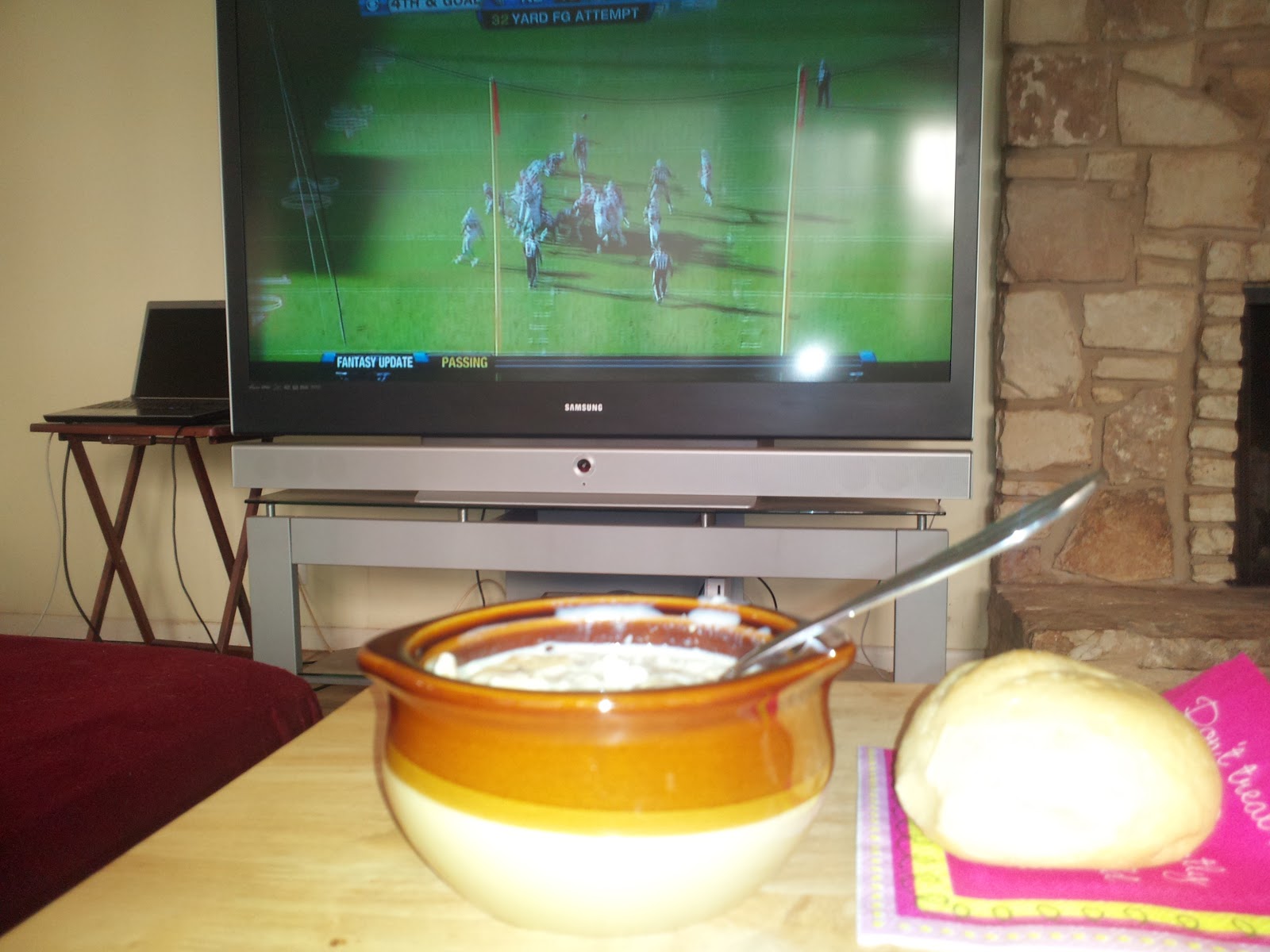