What only 2 days since my last post not two years?!? I thought I'd try to do this a bit more often when I can find the time.

We took M in yesterday to his allergist for an in-office food challenge for peanut butter. It was a fail...not because he reacted to the peanut butter but because he would not taste it. I love our allergist...after about 45 minutes of waiting for M to taste the peanut butter she said that it was not worth it. She did not want him traumatized over the experience. He was in tears, red, puffy eyes and a runny nose...had he eaten the food his tears/runny nose could have masked any symptoms. So we've decided to wait a bit until we try again. We'll see her again in 6 months to go over how things are going. I am thinking of looking for a therapist for M. His experience in Belize really shook him and I would love to find someone that he could work through those feelings with.

A bit more about what happened when M had his reaction...
After M had his reaction we took him back tot he restaurant where it happened so that he could feel safe going back - it was just for a visit the first time, not to eat and to let the staff see him. They were extremely upset when they heard he had gotten sick. I think it was really good for M to do that because he had a lot of big feelings about what happened. When one of the staff was chatting with us M said under his breath "I'm mad that you made me sick!" I was happy he could state his feelings but also happy the server didn't hear him. She would have felt horrible.

Almost forgot! the best part of going to see the allergist yesterday was when I relayed the story of the reaction in Belize and said "we made a mistake and did not use the epinephrine"...the doctor looked at me and said it was not a mistake it was an oversight. She let us know that she too, as an allergist, has made mistakes with her own kids. She said it's a really hard role to be in and to forgive myself and to stop beating myself up over it. I think I am finally beginning to do that!

Today is M's last day at Pre-K...he's a bit anxious about going to a new school but we had the open house/orientation the other night and was able to meet his teacher and classmates. Are you ready for this?? He's going from a class of 30 to a class of 3!! He's a bit puzzled about it but I think it will be good for him. As J said he'll basically be homeschooled at a school. :)
We have not loved his current school and with hindsight being 20/20 I wish we had found a different school. He did grow socially and only had a few close calls with his allergies, so that was good, but J and I are definitely ready for a new school!

I leave you with a pic of M from this morning :) 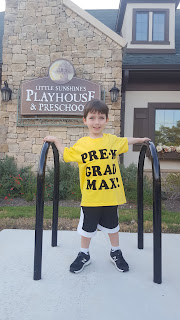 I can't believe it's been that long since I've posted anything!! Wow...wonder if anyone remembers me?
Well, I thought I'd randomly pop in and say hello. :) I guess it will be easier to post some bullets about our life from the last two years rather than a proper post at this time...maybe, just maybe I can try to keep up with this for awhile.

I've attached a few pictures for you...until next time. :)