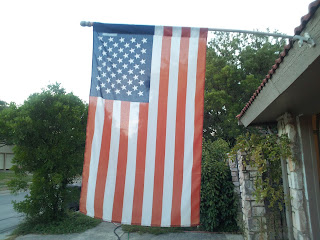 Here is my blue. I wanted to get a better picture of an American flag today or better yet, an American and Texan flag hanging together. Many of the flags were at half-mast today. As I was driving to work I realized I didn't remember today's prompt but was hoping I'd be able to add a flag. It was a beautiful day here in San Antonio and reminded me so much of the morning of September 11, 2001.

After reading Stupid Stork's post today about 9/11 I thought I would do my best at writing one as well. It amazes me sometimes how well I remember that day. I lived north of Boston at the time and worked in Charlestown (which borders Boston) as an admin at a research lab and had a view of the airport tower from my office window. My youngest brother IM'd that morning and said a plane had struck the World Trade Center, I immediately looked out the window and replied "I don't see anything." (I had a view of the Boston World Trade Center as well.) Then he said "No, K, the one in New York." The news started to spread throughout the department and we quickly gathered in the conference room where we had a tv. One of our biggest concerns at the time was for a co-worker's husband who is a pilot. At that point no one knew which airlines had been affected. We all sat together in silence as the 2nd plane crashed into the tower. We went from trying to watch the television coverage to checking things online. The department became one that day.

Once we decided it was time to start going home I had co-workers encouraging me to leave as I had to tack the train home. I hesitated because I felt better being around people and I kenw once I got home I'd be alone (at the time I was living with my Mom and she was scheduled to work a double-shift that day). I finally did get to the train station and it was such an odd feeling. There was a strong police presence and barriers had been put in place. I all of a sudden realized how vulenerable I was going to be during that hour ride home. It was such an interesting ride home. Strangers were talking a lot more than normal and asking each other how they were doing.

When I got home I was glued to the tv. My Mom ended up coming home for a bit, because as she put it she just needed to come home and hug me.

I was lucky enough to not lose anyone that day but I knew several people who did and heard of more than one close call. Close friends of my youngest brother worked in Tower One and were late going to work that morning because they had worked so late the night before. I, like Stupid Stork, wonder what it was like for people in the middle of the country or the South. It sometimes surprises me how often I think of that day. When I see 9:11 on a clock it's the first thing I think of.

Tonight, hug each other a little tighter and say that extra "I love you".